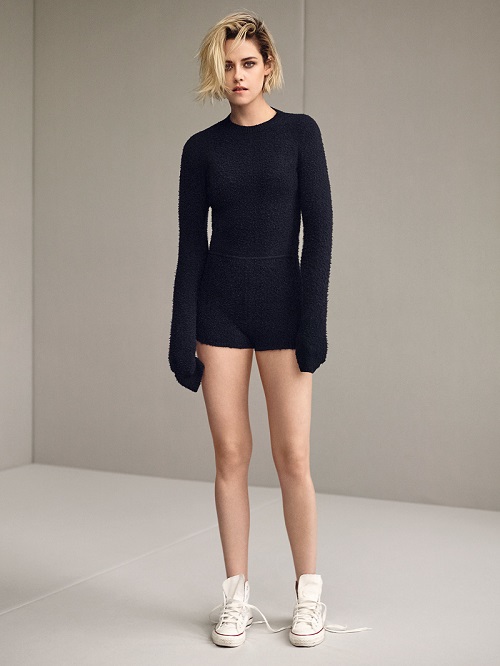 You know the actress from her films. The real Kristen Stewart — funny and fiercely open — is only just emerging. That took years of work.

It’s hard to not be charmed by Kristen Stewart’s Los Feliz home, even harder to believe that it belongs to a movie star and not a college freshman. The basement den of her four-bedroom property, which hovers above Los Angeles — at once belonging to and separate from the hazy city below it — is a study in random: a stop sign on one wall, three metal letters — A, S and S — on another, a Batman action figure, a Winnie the Pooh-themed Pez dispenser, a Playboy pinball machine. The room’s centerpiece, an imposing bookcase, is packed with fashion tomes, a few to do with Chanel, for whom she models; monographs featuring the work of Basquiat, Eggleston and Mapplethorpe; books about food, travel and the Beatles; and novels by Dostoyevsky, Hesse and Kafka. A chunk of shelf is devoted to Jack Kerouac, whose character Marylou she played in a film version of “On the Road.”

The more mainstream chapters of Stewart’s career are tucked into corners. Four volumes of the “Twilight” series — the vampire best-seller-turned-blockbuster-movie-franchise that, beginning in 2008, made Stewart arguably the most popular actress on the planet — sit near the terracotta floor, obscured by a pair of vintage wind-up toys. The shield she wore in “Snow White and the Huntsman,” a movie that came out in 2012, a few months before “Breaking Dawn — Part 2,” the fifth and final chapter of “The Twilight Saga,” is jammed into the highest shelf.

The year Stewart turned 22 should have been triumphant. “Breaking Dawn” and “Snow White” both topped the box office, and Stewart became, according to Forbes, Hollywood’s highest-paid actress. She bought two homes (the other on the beach in Topanga), and she took in her third rescue dog, Cole, found by a friend during a round of disc golf. She also became the face of Florabotanica, a Balenciaga fragrance.

But that July, Stewart was photographed kissing Rupert Sanders, the married director of “Snow White.” It was a shock to fans invested in the symmetry of Stewart’s four-year relationship with her “Twilight” co-star, Robert Pattinson. Tabloid hysteria ensued, and the normally reclusive Stewart caved to media pressure, releasing an emotionally naked apology to Pattinson.

Now 26, Stewart is sitting on her couch, dressed for the skate park in tight blue jeans, a loose white T-shirt and a black cap, worn backward. Cole (along with Bernie and Bear) sleeps at her feet. She lights a cigarette, her hands uncharacteristically steady. Everything about her, in fact — the easy eye contact, casual laughter and willingness to discuss the past — is a striking departure from the often frankly miserable face presented to the world just a few years ago. Stewart has been a professional actress since she was 9, and throughout her teens and into her early 20s, she struggled with what she describes as “debilitating physical anxiety.” But the attention that comes with fame, while still occasionally frenetic, “is no longer negative or fear-based,” Stewart says. “I do think that’s because of the storms I have weathered. It’s not that they make you stronger or calloused — but they do make you a human.”

“I’m not the typical showman,” she adds, curling her feet up under her legs and reaching for another cigarette. “But at the same time, I want so badly to expose myself. I want to be understood and I want to be seen, and I want to do that in the rawest, purest, most naked way I can.”

If that impulse wasn’t clear during the “Twilight” years it’s because, she says, “People wanted me and Rob to be together so badly that our relationship was made into a product. It wasn’t real life anymore. And that was gross to me. It’s not that I want to hide who I am or hide anything I’m doing in my life. It’s that I don’t want to become a part of a story for entertainment value.”

For the past three years Stewart has been dating a visual-effects producer named Alicia Cargile. She scrolls through pictures of the two of them on her private Instagram account. “Look how cute she is,” Stewart says at one point. “I love her so much.” (Other affectionate comments are unprintable; Stewart swears like a trucker.) Only recently has she been open to a conversation about her romantic life, let alone her sexuality. “I would never talk about any of my relationships before, but once I started dating girls it seemed like there was an opportunity to represent something really positive,” she says. “I still want to protect my personal life, but I don’t want to seem like I’m protecting the idea, so that does sort of feel like I owe something to people.”

Stewart is still navigating how much to reveal, and to whom, a challenge for anyone closely scrutinized, but particularly for an actor dependent on a connection with characters and audiences. “How do you feel like you’re not being stolen from,” she asks, “yet at the same time not guard yourself to the point of depriving yourself of so much goodness in life?” Her search for the answer led to many sleepless nights, which was itself a lesson. “Nothing killed me,” she says. “I was skinny as hell, I looked crazy, but I was fine. I now have faith in my body to carry on, and that has made me a better actor.”

An increasingly compelling and nuanced performer, Stewart describes the process at different times as “harnessing a fluid,” “tapping into a magic world” and “finding a portal.” It is, for her, an “explorative, meditative, moving, beautiful, transcendent experience that brings us all closer.” Since the beginning, she has toggled between major studio movies and smart, acclaimed work with masterful directors. (These days, she’s favoring the latter: Woody Allen’s “Café Society,” Drake Doremus’s “Equals,” Ang Lee’s “Billy Lynn’s Long Halftime Walk” and Kelly Reichardt’s “Certain Women.”) What’s new is her willingness to take on characters that might have previously overwhelmed her. In the new psychological thriller “Personal Shopper,” she reunites with the director Olivier Assayas to play a woman mourning the death of her twin brother. (For her performance as a celebrity’s assistant in Assayas’s last film, “Clouds of Sils Maria,” she became the first American actress to win a César Award, France’s Oscar equivalent.) Her character is, Stewart says, “the most isolated, lonely person I’ve ever played, somebody that is ruled by fear and ferocity.”

During production, Stewart worked 18-hour days, six days a week, and when she wasn’t filming she was promoting her partnership with Chanel. “As a younger person, I would have lost steam: ‘I’m tired. I don’t feel good. I’m sick.’ Instead I tried to make myself more sick, more tired, just to see if there ever was a breaking point, and there wasn’t.”

Stewart trails off. A minute later, she shakes her head and smiles. Yesterday, she explains, while visiting her dad on Father’s Day, she came across a photo of the two of them at the premiere for “Panic Room,” her first big movie, in which she played Jodie Foster’s daughter. Then just 11, she was dressed on the red carpet in a severe, ill-fitting black outfit that she’d chosen herself. She was so nervous that a photographer asked her to calm down. “What you don’t understand,” she told him, “is that I actually can’t open my hands.” She holds up a white-knuckled fist to demonstrate.

Stewart has always had what she refers to as “high-functioning adrenal glands,” only now, it seems that she’s figured out a way to channel her anxiety productively, to enjoy the process of acting rather than simply enduring its trappings. When she notices me glancing at a leather-bound journal between us on the coffee table, she opens it to reveal poems she’s written over the years, mostly while flying. If she’s happy with how a poem has turned out, she transcribes it into the journal.

“Come,” she says, leading me upstairs to a cluttered garage. The disarray makes it feel like the most intimate room in the house. A canvas, painted almost entirely in black, rests against one wall. At the center is a man in repose, halfway between sleep and consciousness, surrounded by dark. Before I can react, she says, “Yeah, I mean, I’m not, like, good. It just feels nice to apply paint to something.”

Stewart is making a short film inspired by the image, which in turn evolved from one of her poems. “It’s basically about that moment when you wake up and you get dressed and you realize” — she slips into first person — “I’m not sad anymore. I’m not saturated anymore. I’ve been dropped back into everyone else’s reality and now I can live again.”
Tags: magazine: cover shoot, magazine: scans, media: article, media: interview, photos: hq, photos: photoshoot
Subscribe