Note: It was translated with Google Translate. 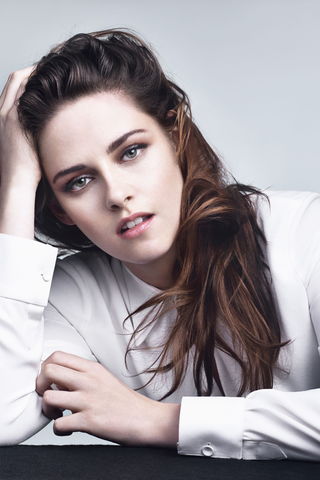 New York in January 2014. Kristen Stewart - in jeans, tank top and Balenciaga blazer - will be officially unveiled as the face of the new Balenciaga fragrance "Rosabotanica". In an interview with Vogue, she talks about daring rose fragrances, filming in Germany and her penchant for eyeliner

VOGUE: Congratulations, Nicolas Ghesquière has again committed as a testimonial. He is not the only designer who raves about you ...

Kristen Stewart: Honestly, I can not explain it. But I feel as a muse very comfortable. You meet so many talented people who in turn inspire me. So this is mutual. And I like the creative energy that exists at shoots. It is as if you make a mini movie and has given me a whole new approach to fashion and beauty world.
The shoot for the "Rosabotanica" campaign exotic flowers adorn you.  You wear a smokey eye and a loose fitting updo. Onto which styling you put in everyday life?

I like it a lot, to be styled for photo shoots or film premieres. And I like to wear flashy eye make-ups - if they are suitable for the occasion. But to be honest, what you see on the red carpet, is the work of talented stylists. Privately, I guess naturalness. I prefer to wear outfits that are clean and easy. And as absolutely black eyeliner.

Eyeliner is thus the beauty product without having to not go out of the house?

I do not wear much makeup. That was never a big deal for me. But black eyeliner I have always with me. A great product because you can vary it so.

Blurred in Undone look. I always wash my face at night, but my eyes I never put make-up on. It looks the next morning just to look good!

On what occasions you wear perfume?

Before I was a testimonial, I did not have much experience with perfume. The fresh scent of roses "Florabotanica" quickly became my companion for the day. I have often placed him. It's nice now to have an alternative. "Rosabotanica" I put preferably on the evening. The spicy and sensual composition is somehow daring. So perfect for going out.

What are you working at the moment?

I just presented at the Sundance Film Festival to my new film "Camp X-Ray". It was so great to seeing the film crew. I like the festival very much - cool people and independent films. And soon I begin filming in New York "Still Alice", an exciting new project. Julianne Moore will play my mother who suffers from Alzheimer's. I love Julianne, she is a wonderful actress!

In 2014 "Sils Maria" will be in the cinema, which was partly filmed in Berlin. How did you like the city?

We have worked very much, but I was fortunate enough to watch a little time to me the city. I love Berlin! It's such a dynamic and unique city. We film in Sils Maria, it's beautiful there!

You visit premieres, turning in New York and as a beauty ambassador on the road - what you want yet for the new year?

I have made an unplanned extended break. I therefore hope for 2014 professional challenges. There is nothing better than to do things that you love.