sources: et via tcp via 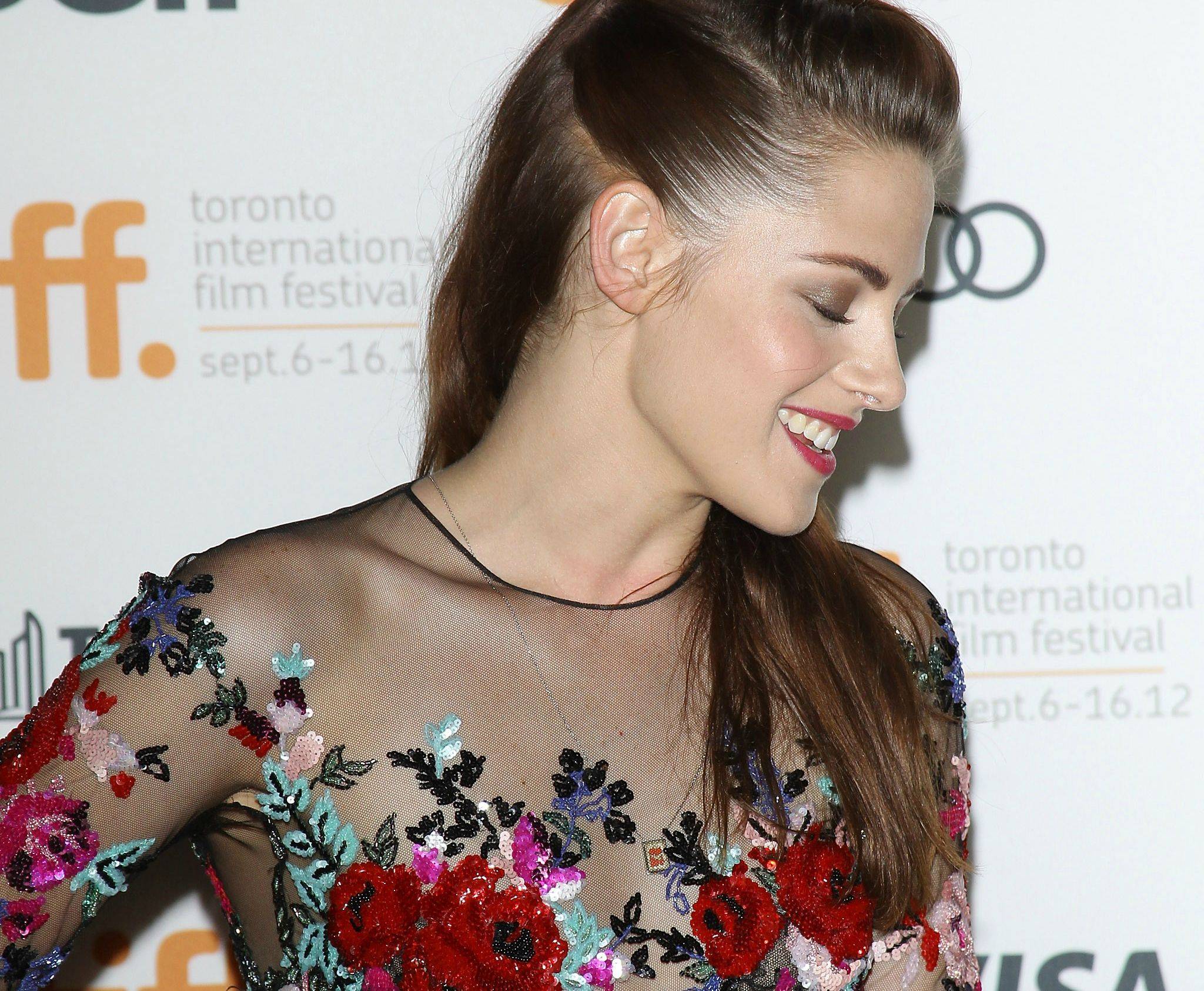 In her next movie, Kristen Stewart goes to bed with two men at the same time, gives both of them simultaneous hand jobs in the front seat of a car and performs oral sex on one of them while he's driving said car. She also appears topless twice, once just minutes into the movie, and spends much of the rest of her time doing drugs and robbing people.

But wait. Before you scroll down to the comments to register your disgust at Stewart's latest attempt to lead the nation's youth into a ditch of vice and vulgarity, try to imagine any of her fellow Millennial über-celebrities giving a performance as brave, or as powerful, as the one Stewart delivers in "On the Road," a new adaptation of Jack Kerouac's famous novel, directed by Walter Salles ("The Motorcycle Diaries").

For Taylor Swift, edgy is writing a breakup song and encouraging her fans to figure out who she's talking about. For Miley Cyrus, it's letting her side boob hang out. For Kim Kardashian, it's dating Kanye West and daring the world to decide if the whole thing is one giant put-on.

Is Kristen Stewart the only major celebrity of her generation who also happens to be a true artist?

It's certainly telling that she chose to make her big post-scandal comeback at last night's North American premiere of "On the Road," which took place at the Toronto International Film Festival. (...) And while it's possible Stewart was contractually obliged to support the film, the decision to spend an hour communing with her fans and answering questions from the press had to be hers. Again and again, she told reporters that she would be just as happy to be there promoting "Twilight," but I wonder. I suspect it's important to her to remind the world that she's more than just a twinkling star in the celebrity-weekly firmament. She's a real actress.

Like her contemporary Shia LaBeouf, Stewart gets a lot of flak from people who can't stand her zillion-dollar franchise. I won't claim to be a "Twilight" fan, but I'm consistently impressed by Stewart's work in what you might call more "serious" films, and "On the Road" is no exception.

This is definitely an "On the Road" for our times, directed by a Brazilian Boomer for a global audience of Millennials. The film doesn't shy away from the destruction that Kerouac's speed-demon hero, Dean Moriarty (Garrett Hedlund), wreaked on those around him, and, as a result, the women register with far more impact than they do in the book. Kirsten Dunst plays Dean's second wife, Camille, as an arrogant princess whose dreams fall victim to her man's wanderlust, but it's Stewart who steals a sizeable portion of the film. Not in a showy way -- it's remarkable how much time this massive global superstar spends in the back seat, literally and figuratively. But hers is a bold, brave, indelible performance. When we first see her, she's topless on a bed, shaking off her sexual afterglow so she can roll a few joints for Dean's friends. "You're the only girl I've ever known who can roll tea like this," (...)

The toplessness itself is an extremely courageous choice for someone as famous as Stewart. There is no question that screen shots of those scenes will proliferate all across the Internet, in contexts that would make even Marylou blush. But Stewart has proven that she's the kind of actress who puts her commitment to the role above concerns like that. To some people, her self-seriousness comes off as pretentious, but I see it as her way of protecting herself from the madness that surrounds her.

Marylou's sexually competitive side makes her a great fit for Dean, but she doesn't capture his imagination the way Camille does, and Stewart does her best acting during the group's long trip from New Orleans to San Francisco. As they depart, Dean, who has more or less replaced sleep with Benzedrine, promises to spend half his time with Marylou even though he's returning to Camille, who has fathered his child, but Marylou knows that's not going to work. As the car barrels toward the coast, we watch the clouds slowly fill Stewart's face. This is acting of the highest order, and it's all the more impressive that it's being done by one of America's most notorious celebrities.

You know you're dealing with a real movie star when her off-screen travails enhance her performance, rather than detracting from it, and that's what happens here. Stewart's Marylou is pure Id: she steals what she needs and she screws who she wants, when she wants. (..)

(...) She kept the focus on the film -- and the real people whose stories inspired Kerouac -- and shrewdly did all her interviews in tandem with Garrett Hedlund. That protected her a bit by making it feel extra-inappropriate to shout out Robsten questions (not that she had much to fear from the polite Canadians bunched up against the rope line), but it also represented an admirable level of collegiality. Hedlund, after all, plays the lead in the film, not Stewart, and it was generous and right of her to share her spotlight with him.

Judging from the hundreds of fans and dozens of media outlets who crowded around her last night, Stewart has plenty of support to get her through what has been a tough time. She doesn't need any help from me. But I'm going to keep rooting for her anyway, if only because it would be a shame if we ceded our celebrity arena to shameless fame balls and reality-TV oversharers. I still remember when the biggest celebrities were people like Liz Taylor and Mick Jagger and Jack Nicholson. People who did great work and lived fascinating lives.

If we want interesting people to share their lives with us, we can't rip them to shreds every time they make a mistake -- or a courageous choice. And we should try to recognize real talent when it arises in our midst -- even when it comes attached to a corny franchise.

Read the full article @ the source 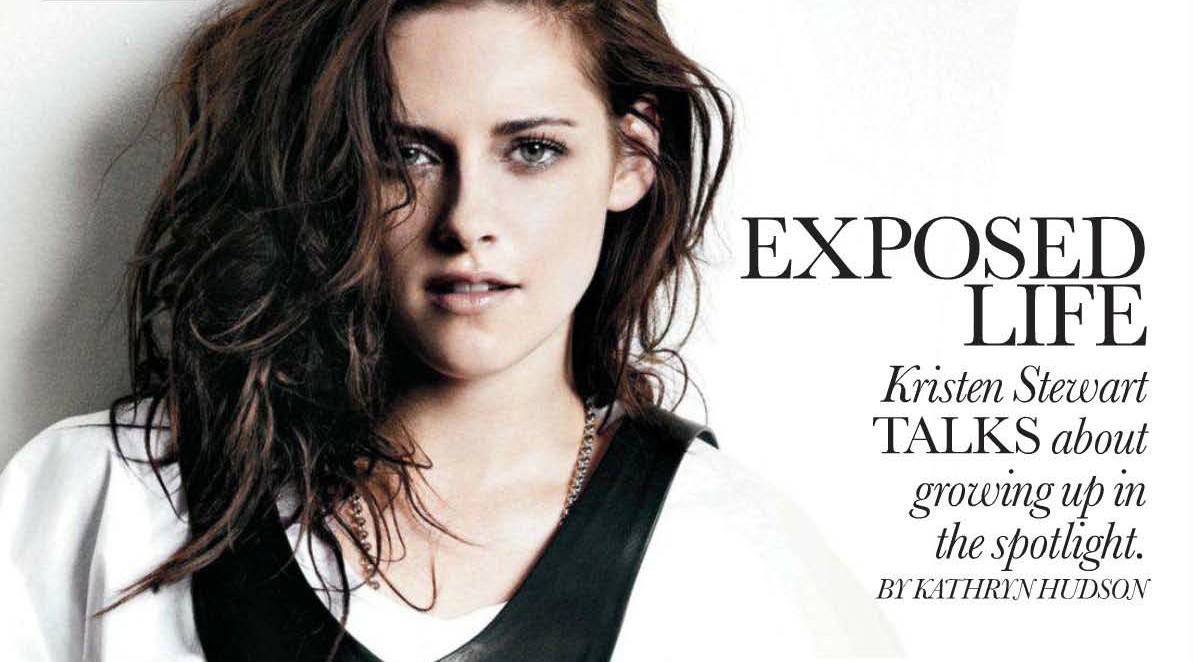 On The Road' Stars Talk About Director's 'Devotion' To Film
"I totally deserve to be here, I promise! Let me tell you why. Me and Tom did so much research."
source

Kristen Stewart Opens Up About 'Twilight' And VMAs From TIFF
"I don't like cats, I'm a dog person!"
source 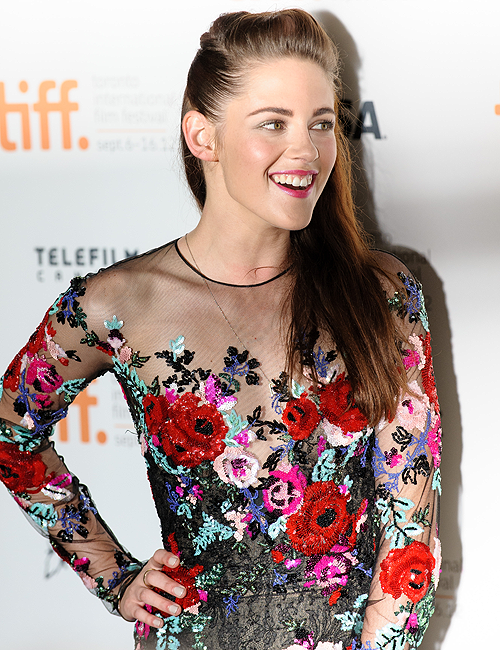 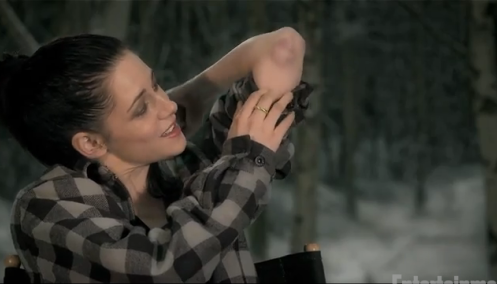 I don’t suddenly turn into a warrior,” says Stewart in this exclusive look at one of the behind-the-scenes features on the upcoming Snow White and the Huntsman Blu-ray (out this Tuesday, Sept. 11). “She hasn’t learned how to fight, and she doesn’t want to.”
That doesn’t mean Snow White avoids conflict.

”I get the crap beat out of me,” says Stewart with a smile — and she’s got the bruises to prove it!
Collapse